In a brand new project, I am going to be looking weekly at the complete cinematic, feature-length filmography of a director in the run up to a newly-released piece of work.

In the first Filmography project, in advance of his new film Greta to be released in April 2019, I’m looking at celebrated Irish filmmaker Neil Jordan…

There comes a point with any filmmaker, no matter how great or good, when the magic wears off and they produce something they would rather forget. Some get it out of the way early. For some it comes at the end of their career. For Neil Jordan, his fourth picture very much fits the bill. High Spirits is what you might, charitably, coin – a misfire.

You sense with High Spirits the fusion of numerous elements that have marked Jordan’s journey as a filmmaker up to this point, a journey which by now is defiantly idiosyncratic and liable to avoid pigeon-holing. While High Spirits is very clearly a Hollywood product in the manner none of his previous three pictures could be described, it sees for Jordan both a return to his native Ireland when it comes to location and narrative (not evidenced since Angel), plus the interest in fantasy trappings as was The Company of Wolves, even if they are wildly different approaches.

Jordan has stated that he was locked out of the editing room on High Spirits and he has “locked in a vault” the original cut he would have released, suggesting a strong displeasure with a final product which is striking in how forgettable and rote the finished product is compared to, particularly, his last film Mona Lisa. The conflagration of Irish, British and American actors, crew and production values, works to the detriment of the depth and substance we saw in Jordan’s previous films. He remains a director developing and evolving, but this feels from the get-go like an unusual aberration.

High Spirits is high concept Hollywood comedy fantasy: a hard on his luck faded aristocrat (played by a sozzled-looking Peter O’Toole) decides to turn Castle Plunkett, his ancestral Irish home, into a tourist attraction for ghost hunters looking for a spooky retreat – little counting on the existence of *actual* ghosts in the form of his murdered ancestor Mary (a young and seriously miscast Daryl Hannah), who proceeds to fall in love with a henpecked visiting American tourist (played by Steve Guttenberg). ‘Hilarity’ ensues as O’Toole flounces around creating mischief, Guttenberg attempts to sell the beyond ridiculous, and the script and story just collapse in on themselves.

You can very much feel the Ghostbusters effect on High Spirits. Released in 1988, it arrived at the tail end of a decade defined by the high concept blockbuster comedy, particularly with a whimsical or science-fiction bent. Big, released half a year before this, captured the box office and popular culture, helping to launch Tom Hanks’ career; Who Framed Roger Rabbit?was a huge summer hit the same year, blending comedy and visual effects in a near-groundbreaking way. High Spirits, though written by Jordan, feels as if it went through a checkbox blender of components the studio mathematically believed would make it a major box office hit.

In fact, High Spirits bombed hard for TriStar, only recapturing half of its budget, and this almost seems fitting for a film which just does not track with Jordan’s career, or the kind of pictures he had previously been making, in any way.

It plays remarkably on traditional Irish stereotypes which Angel, the last film Jordan set in Ireland, assiduously avoided; all of the Irish characters surrounding O’Toole’s lord and master are loyal bumpkin simpletons you can envisage barely existing beyond the castle and their local pub. Liam Neeson, by now a fairly established actor even if he hadn’t quite reached his 1990’s zenith, must surely cringe if reminded of his portrayal as Martin Brogan, a lusty and vengeful 18thcentury ghost – all shouty vowels and breeches bursting with passion. It often feels like the kind of picture someone would make about Ireland who had probably never been there.

Everything feels designed to play to comedy spectacle and convention, as opposed to telling either a caper or a love story as perhaps on Jordan’s original page – though a chief problem with High Spirits is that it never decides which of the two it wants to be, nor indeed whether our main character is O’Toole’s con artist or Guttenberg’s romantic hero. Jordan’s film will eschew any witty byplay for a possessed bed crashing through the ceiling and careering down the castle stairs here, or a pratfall from one character there. Even for a film with a concept it would be impossible to take seriously, High Spirits rarely tries to milk out of the idea any subtext or substance.

Again, you wonder if perhaps more of Jordan’s ongoing interest in unconventional, often forbidden, romance and sex were more acute on the page. After the Gothic darkness of The Company of Wolves and the tragic urban melancholy of Mona Lisa, approaching these themes from a lighter, comedic lens does sound exactly the kind of left turn a filmmaker like Jordan would do, particularly with a bigger budget and his first A-list, established cinematic icon on the payroll. The central romance simply never works, nor the inversion of the dynamic as played out with Beverly D’Angelo’s harridan of a wife. High Spirits may have been a stronger film had it just been a straight up, Fawlty Towers-esque farce about O’Toole pretending the castle was haunted.

Jordan in the end cannot help those romantic themes ending up farcical and silly, in a way which rather than serve as cutting or a fresh play on the serious takes he had provided them in earlier films, just come off as safe and uninspiring. Beyond even the spooky romance, we have Peter Gallagher’s conflicted American priest being tempted by Jennifer Tilly’s vampish (what else would she be?) paramour, and in the end Jordan unconvincingly allows himself some wish fulfilment as Gallagher throws away the dog collar and runs off with the hot woman, declaring: “I’m only human!”. Indeed. 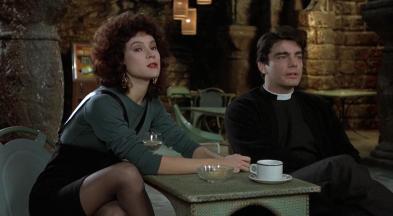 There is a much stronger version of High Spirits and it lies in American hit TV series The X-Files. Look up the Season 6 episode ‘How the Ghosts Stole Christmas’, an episode which doesn’t rip off Jordan’s film but certainly makes the idea of a spooky tryst and a romantic narrative inside a spooky old house work far better than it does here. High Spirits simply feels like a film that only comes from a director lacking the confidence, or maybe the position as an auteur, to either rip it all up and start again, or reject what he made as not indicative of what he was capable of.

High Spirits also proves that not every silly, high concept supernatural comedy is going to be a Ghostbusters, hence why it has faded from the minds of all but its most ardent fans, and anyone perhaps buoyed by nostalgia. Sadly, this new trend for Neil Jordan to gel poorly with the Hollywood studio system is about to continue, in a project perhaps even more ill-conceived and forgettable than this sojourn into over the top whimsy.

Next up in the analysis of Neil Jordan’s filmography… 1989’s We’re No Angels.

Published by A J. Black