London Film Festival 2020 is running from October 2nd through to October 19th, and I’ll be variously covering a few films from the event this year…

All through Shirley, it was hard to work out if the film was intentionally or unintentionally pretentious. The answer still eludes me.

Josephine Decker’s film, her follow up to 2018’s celebrated Madeline’s Madeline, and adapted from the novel of the same name by Susan Scarf Merrell, brews up passion and obsession within the smoky yet starch world of New England academia, as brilliant yet troubled author Shirley Jackson (a mesmeric Elizabeth Moss), at the behest of her blowhard professor husband Stanley Hymen (Michael Stuhlbarg), takes on newly married young couple Fred & Rosie Nemser (Logan Lerman & Odessa Young) to help with household chores, both unaware they’re being drawn into a somewhat twisted psychological battle between the married elites involving seduction and academic prowess.

Shirley, therefore, is a psychosexual, theatrical piece buoyed by the magnetism of Moss and Stuhlbarg’s powerfully loathsome performances, but sometimes at the expense of riveting drama.

We probably should know more about Shirley Jackson than history allows, given she serves as an influence on everyone from Stephen King through to Neil Gaiman. 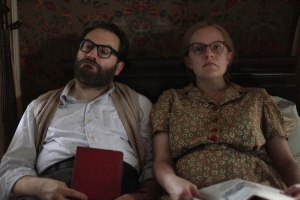 Her candle burned short, dead at less than fifty years old, while her husband only briefly outlived her himself, but Jackson stamped her literary prowess heavily on the genres of American horror and mystery. Seen that celebrated Netflix series The Haunting of Hill House? That comes from a Jackson novel, for instance, written around the time Shirley is set, the late 1950s. Shirley herself is gripped by the intensity of writing fiction but also obsessed with the real-life mystery of a girl who recently vanished from Bennington College, the Vermont campus from which they live and work, which only continues her savage slide into overbearing alcoholism which fuels her toxic marriage to the pompous, promiscuous Stanley, a man with a penchant for bedding his ingenues.

Conversely, Fred and Rosie are, if not virginal, certainly pure in terms of the elitist province they find themselves aspiring to enter. Fred seeks to woo Stanley’s favour in order to reach tenure through his dissertation, while Rosie finds herself victim to Shirley’s tempestuous whims and is drawn ever further into her tightrope between genius and madness as Shirley attempts to both write, psychologically best her husband, and explore her own real-life mystery. Decker invites the audience to observe Shirley & Stanley through their normalised prism, and it only serves to accentuate their eccentricities, rampant egotistic neuroses, and bohemian excesses as she paints a late ‘50s of indulged colour, music and flowing, often corrupted bonhomie.

Yet at the same time, she infuses the piece with a touch of the Gothic. Shirley and Stanley’s house is towering and cluttered, replete with broad, austere rooms which feel at once removed from 19th century academia and shading the kind of house of horror Shirley might write about in her novels. Decker ensures that warmth, for all the heat passing through many of these sexually charged (or indeed sexually repressed) characters, is completely lacking.

Shirley is concentrated on damage, and eschews any traditional pathway undertaken by many a biopic. This is not a rendition of Shirley’s life, or how she created the books she wrote; indeed in some sense it’s not about writing at all. But it is about how obsessive commitment to craft can be self-destructive, and both Shirley & Stanley have transformed, through it, into creatures ready to use and discard people like Fred & Rosie to satisfy their appetites.

Shirley, therefore, doesn’t paint Jackson as a genius to venerate, but rather a psychologically scarred writer consumed as much by the bottle as she is words, and it’s thanks to Moss—as gifted and naturalistic a performer as she is—to imbue the character with a frailty that Stuhlbarg contrasts with a boorish sense of entitlement. Dialogue between them cracks with tension. Theirs is a viperish, combustible combination that displays Decker’s film at its very best. The rest is occasionally wearing, as her direction never tips directly into the avant garde which leaning into indulgence. That perhaps fits Shirley & Stanley quite well, strangely enough, but at times it makes for a frustrating experience.

Nonetheless, Shirley provides a tilted, off-centre gaze through a window into toxicity, narcissism and chronic depression which, if not exactly fun, is certainly enlightening. Elizabeth Moss proves yet again that she can basically do anything, and do it well.

Shirley is out in U.K. cinemas on 30th October.

If you enjoyed this read, fancy buying me a cup of coffee on Ko-Fi? Just click here. Thanks a lot if you do.